COMBI provides estimates of the major multiple impacts of the energy efficiency potential that goes beyond an existing policies scenario in the year 2030. Impacts are quantified by EU member state and by single energy efficiency improvement (EEI) action. Therefore, detailed input data on energy savings and investment costs are necessary: COMBI uses detailed stock models to this end. The COMBI input data modelling exercise produced a baseline scenario (based on existing EU legislation) and an efficiency scenario (based on ambitious assumptions on technology implementation following more ambitious policies), resembling the EUCO+33 scenario of the EU EED impact assessment.

The difference between the baseline and efficiency scenario is used as input data (i.e. incremental energy savings and investment costs) for quantifying multiple impacts. Also, only incremental multiple impacts are quantified. This means, COMBI quantifies the additional multiple impacts of more ambitious policy action. One goal of COMBI scenarios and impact quantification was to provide a bottom-up funding of the scenarios modelled for the EU-Commission’s EED Impact Assessment and its annexes (based on PRIMES et al.).

However, there are some major differences in the modelling techniques and the two (COMBI/EED-IA) approaches are not fully comparable, mainly due to

As a consequence, scenarios cannot be fully comparable, but COMBI provides a much more detailed (by EEI action and EU-member state) disaggregation of energy savings and costs, while covering only a share of the full potential. Overall, the COMBI efficiency scenario approximates the “EUCO30” scenario of the EU-Commission’s EED Impact Assessment, but in terms of level of ambition and if covered actions would be extended, the COMBI scenario would be around the “EUCO+33” scenario. 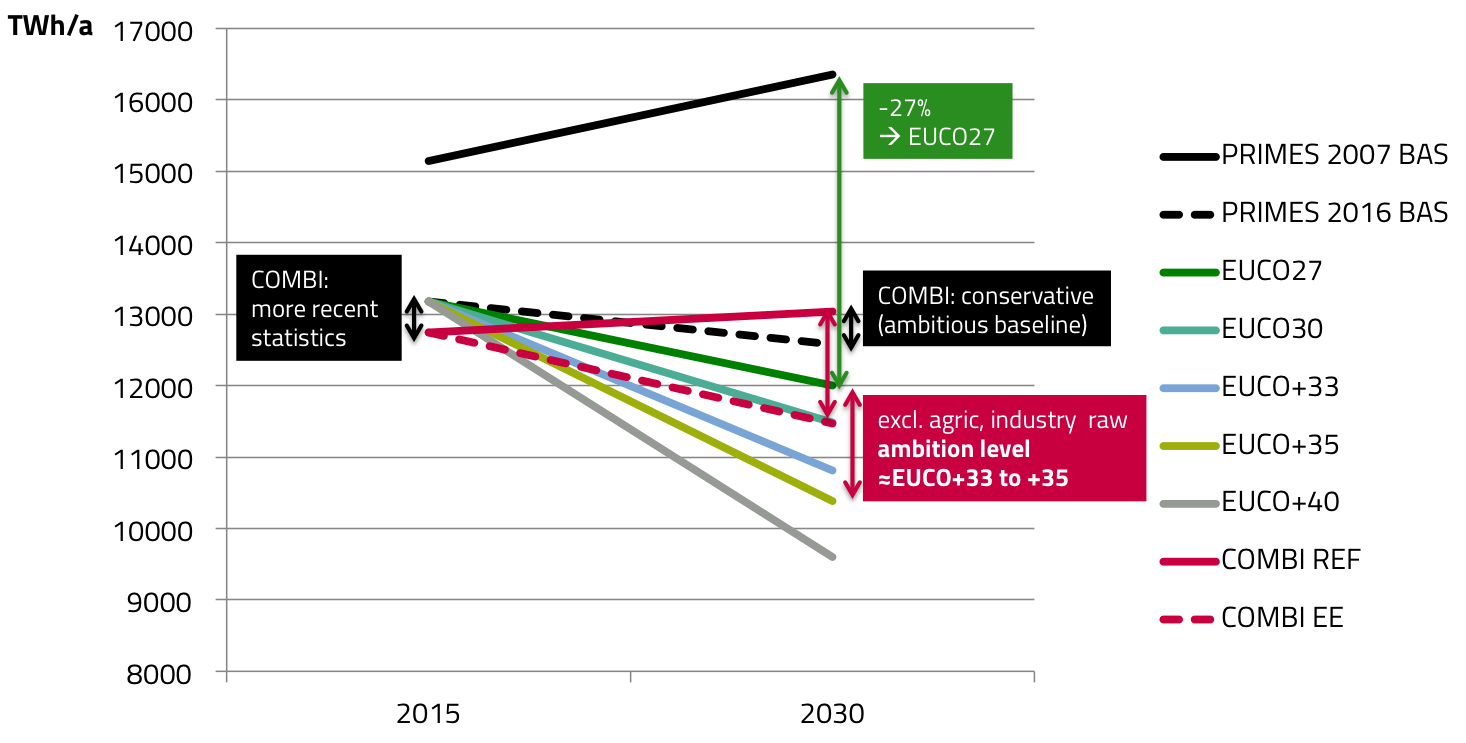 The input data will be available via the COMBI online tool (launch 17 May 2018), and a detailed data documentation in the download section.

As input data for the quantification of impacts, COMBI quantifies incremental energy savings and investment costs for a list of 21 EEI actions (more information on COMBI EEI actions), together with a large set of additional data and assumptions.

Subscribe by entering your email-address below. Find past newsletters in the Archive.

This project has received funding from the European Union’s Horizon 2020 research and innovation programme under grant agreement No 649724.
The information on this website reflects only the author's view. The Agency is not responsible for any information it contains.
© 2015 by COMBI Project Consortium.
All rights reserved.